Pros and Cons of Living in Chicago

Chicago is undoubtedly one of the most famous cities in the world. What is it about the “Windy City” that draws so much attention? The answer is—plenty!

The culture, the sites to see, the food, and more make Chicagoland such a popular place to live. However, not everything about this glittering city is picture-perfect.

Are you considering making a move to Chicago? Take a look at the pros and cons of living in Chicago, also known as the “jewel of the Midwest,” to help you make the best decision to suit your lifestyle.

Pro—Some of the best food in the world!

Chicago is known all over the world for a delicious deep-dish pizza, hot dogs, popcorn, Italian beef sandwiches, and more.

Chicago is also a very diverse city with a bustling scene for outdoor, family-friendly, and nighttime activities.

A common issue with big, busy cities is a fair amount of traffic.

Chicago also has a rather high cost of living compared to some other large cities.

The “Windy City” isn’t just a mecca for food enthusiasts and nightlife seekers—Chicago is home to several sports teams with a number of championships under their belts, as well as diehard, lifelong fan bases.

Pro—Home to Hollander, the best moving company in Chicago

If you’re motivated to move to Chicago, you’ll have another unexpected perk awaiting you and ready to make your journey even easier—Hollander Storage & Moving.

These movers in Chicago have been in business since 1888, delivering countless customers with flawless moving and storage services.

Are you ready to get moving with Hollander? Call or visit https://hollandermoving.com/

For your free move quote today!

Get an Estimate Over
Video Chat 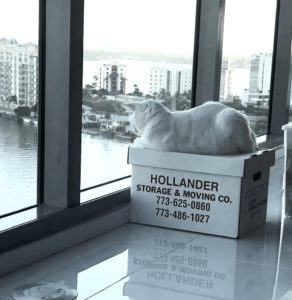 REQUEST A CALL BACK

What Our Clients Say

The driver was the head of the crew, and he was on top of everything. He made the experience working with Hollander Moving a pleasure. We have used others before but it was our first time using Hollander. Everything turned out great.

Every employee I worked with was courteous, professional, and exceedingly competent. I was nervous about the packing and long distance move (from Illinois to New Mexico, October 2009) and Hollander helped make the move as smooth as possible. Not a thing was damaged or broken

I would recommend Hollander to any company thinking about switching vendors, and any family making a move. A Hollander rep even stopped by my new place when they were unloading just to check on things.

Everything Hollander has done was over the top. It was courteous people, polite, caring. Their friendliness was over the top. There was one member of the crew who’d been a friend for 30 years, and the rest was family. I couldn’t say enough about them.

I recently moved from Chicago to Tampa and expected a few road bumps along the way but was pleasantly surprised when everything from loading to delivery was flawless. Everyone I came in contact with was very professional and knowledgable. I highly recommend Hollander Moving and Storage as they are a class act.

This move envolved packing and delivery to four different destinations. Attention to detail and coordination were vital and effectively executed by Tony R driver and his crew. Ardene did a great job coordinating everything. The entire group were both extremely pleasant and efficient.

We are processing the form. Thank you for your patience